The site of a recent death, accident, or other traumatic scene can be overwhelming. However, it’s important to get the situation cleaned up in an effective and safe manner, and to avoid touching the harmful substances that may be present. Instead, contact a disaster restoration team who will be equipped and trained to perform the necessary biohazard cleanup and crime scene cleaning.

ServiceMaster Fire & Water Cleanup provides biohazard cleanup in Lancaster, PA. Our biohazard technicians are IICRC-certified to remove hazardous materials, bodily fluids such as blood, and other harmful substances from accidents, crime scenes, and other traumatic sites. Our crime scene cleaners will work with any local authorities to ensure ongoing investigations are not interrupted and that protocols are followed. 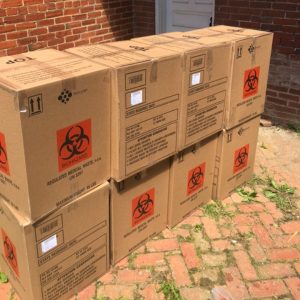 Our biohazard cleanup services in Lancaster, PA include:

Contact Us for Biohazard Cleanup and Crime Scene Cleaners in Lancaster, PA

If you come upon a trauma scene such as a severe accident, injury, or death, contact ServiceMaster Fire & Water Cleanup for professional biohazard cleanup.

ServiceMaster Fire & Water Clean Up Services has been providing disaster restoration services since the late 1980s. The company currently has three locations throughout Maryland and Pennsylvania. No matter what the emergency – whether it’s caused by water, sewage backup, fire, smoke damage or mold – ServiceMaster Fire & Water Clean Up Services is ready to give you peace of mind 24 hours a day, seven days a week, and 365 days a year.

All of our equipment is modern, well-maintained, and effective. We possess the latest resources and technical expertise to tackle any specialty cleaning or restoration need you may have. ServiceMaster Fire & Water Clean Up Services also has an outstanding service crew, all of whom are required to pass background checks and drug screening tests prior to their employment.

OUR CLIENTS ARE TALKING

“Full and continuing explanations of entire process from beginning to end. Prompt attention by representatives to work completion and relations with insurance company. Cautious warnings to keep us and visiting grandchildren healthy, out of harms way. Time table for work maintained–no late starts or delays. They even gave us lead to separate reputable flooring company to complete job.”

“I had awful water damage from the last storm. Ruined my kitchen. The had the best price quote, scheduled the job as soon as possible. I have allergies to mold and frankly was quite scared, working from home during this pandemic. They were very fast & efficient. They had the whole demo, clean up and water abatement equipment set up in a half a day. The team was very friendly and sealed up the area.”

“Our hot water leaked covering most of our basement. I called Servicemaster Pro on Saturday and they were here right away. EB came with a smile on his face, was very professional, courteous and well-mannered. He extracted all the water, set up the fans and dehumidifiers and hauled away our damaged items. Abby, Libby, Jimmy and EB were wonderful to work with. Servicemaster made a bad situation very easy to deal with.”